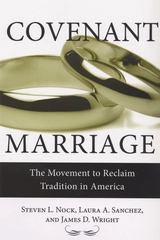 Regardless how you interpret the statistics, the divorce rate in the United States is staggering. But, what if the government could change this? Would families be better off if new public policies made it more difficult for couples to separate?

This book explores a movement that emerged over the past fifteen years, which aims to do just that. Guided by certain politicians and religious leaders who herald marriage as a solution to a range of longstanding social problems, a handful of state governments enacted "covenant marriage" laws, which require couples to choose between a conventional and a covenant marriage. While the familiar type of union requires little effort to enter and can be terminated by either party unilaterally, covenant marriage requires premarital counseling, an agreement bound by fault-based rules or lengthy waiting periods to exit, and a legal stipulation that divorce can be granted only after the couple has received counseling.

Drawing on interviews with over 700 couples-half of whom have chosen covenant unions-this book not only evaluates the viability of public policy in the intimate affairs of marriage, it also explores how growing public discourse is causing men and women to rethink the meaning of marriage.