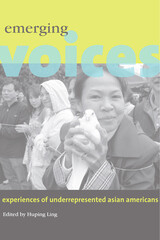 While a growing number of popular and scholarly works focus on Asian Americans, most are devoted to the experiences of larger groups such as Chinese, Japanese, Korean, Filipino, and Indian Americans. As the field grows, there is a pressing need to understand the smaller and more recent immigrant communities. Emerging Voices fills this gap with its unique and compelling discussion of underrepresented groups, including Burmese, Indonesian, Mong, Hmong, Nepalese, Romani, Tibetan, and Thai Americans.

Unlike the earlier and larger groups of Asian immigrants to America, many of whom made the choice to emigrate to seek better economic opportunities, many of the groups discussed in this volume fled war or political persecution in their homeland. Forced to make drastic transitions in America with little physical or psychological preparation, questions of “why am I here,” “who am I,” and “why am I discriminated against,” remain at the heart of their post-emigration experiences.

AUTHOR BIOGRAPHY
Huping Ling is a professor of history at Truman State University and the author of Chinese St. Louis: From Enclave to Cultural Community.
REVIEWS
This book, which begins to understand the experiences of 'underrepresented' minorities, is long overdue. Emerging Voices meets an important need and fills a significant gap in the field of Asian American studies.
— Yong Chen, author of Chinese San Francisco 1850-1943: A Trans-Pacific Community

A unique project that broadens our understanding of diversity and promises to bring new Asian American groups into focus in a valuable way.
— George Anthony Peffer,, editor of the Journal of Asian American Studies