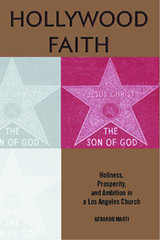 In Christianity, as with most religions, attaining holiness and a higher spirituality while simultaneously pursuing worldly ideals such as fame and fortune is nearly impossible. So how do people pursuing careers in Hollywood's entertainment industry maintain their religious devotion without sacrificing their career goals? For some, the answer lies just two miles south of the historic center of Hollywood, California, at the Oasis Christian Center.

In Hollywood Faith, Gerardo Marti shows how a multiracial evangelical congregation of 2,000 people accommodates itself to the entertainment industry and draws in many striving to succeed in this harsh and irreverent business. Oasis strategically sanctifies ambition and negotiates social change by promoting a new religious identity as "champion of life"-an identity that provides people who face difficult career choices and failed opportunities a sense of empowerment and endurance.

The first book to provide an in-depth look at religion among the "creative class," Hollywood Faith will fascinate those interested in the modern evangelical movement and anyone who wants to understand how religion adapts to social change.

AUTHOR BIOGRAPHY
Gerardo Marti is an assistant professor of sociology at Davidson College in North Carolina.
REVIEWS
Drawing on rich ethnographic data from his study of Oasis Christian Center in Hollywood, Gerardo Marti describes an emergent style of neo-Pentecostal worship and religious community that speaks to members of the 'creative class' of youthful Millennials who are in their 20s and early 30s. This cutting-edge analysis of where religion may be heading is theoretically sophisticated and yet highly readable.
— Donald E. Miller, Executive Director of the Center for Religion and Civic Culture, University of S