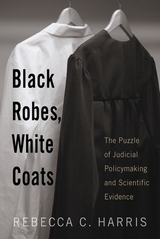 Scientific evidence is commonplace in today's criminal trials. From hair and handwriting analysis to ink and DNA fingerprints, scientists have brought their world to bear on the justice system.

Combining political analysis, scientific reasoning, and an in-depth study of specific state supreme court cases, Black Robes, White Coats is an interdisciplinary examination of the tradition of "gatekeeping," the practice of deciding the admissibility of novel scientific evidence. Rebecca Harris systematically examines judicial policymaking in three areas forensic DNA, polygraphs, and psychological syndrome evidence to answer the question: Why is scientific evidence treated differently among various jurisdictions? These decisions have important implications for evaluating our judicial system and its ability to accurately develop scientific policy.

While the interaction of these professions occurs because the white coats often develop and ascertain knowledge deemed very useful to the black robes, Harris concludes that the black robes are well positioned to render appropriate rulings and determine the acceptability of harnessing a particular science for legal purposes.

Presents an original model of the gatekeeping process

Rebecca C. Harris is an assistant professor of politics at Washington and Lee University in Lexington, Virginia. She is a public policy scholar with an emphasis on law and science.