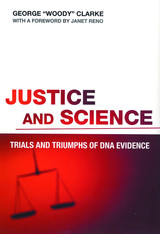 Databases of both convicted offenders and no-suspect cases demonstrate the power of DNA testing to solve the unsolvable. George “Woody” Clarke is a leading authority in legal circles and among the news media because of his expertise in DNA evidence. In this memoir, Clarke chronicles his experiences in some of the most disturbing and notorious sexual assault and murder court cases in California. He charts the beginnings of DNA testing in police investigations and the fight for its acceptance by courts and juries. He illustrates the power of science in cases he personally prosecuted or in which he assisted, including his work with the prosecution team in the trial of O. J. Simpson.

Clarke also covers cases where DNA evidence was used to exonerate. He directed a special project in San Diego County, proactively examining over six hundred cases of defendants convicted and sentenced to prison before 1993, with the goal of finding instances in which DNA typing might add new evidence and then offered testing to those inmates.

As Clarke tells the story of how he came to understand and use this new form of evidence, readers will develop a new appreciation for the role of science in the legal system.

George “Woody” Clarke served as a prosecutor in the San Diego district attorney’s office from 1982 to 2003. He has appeared frequently on national television, he has co-starred on America’s Most Wanted with host John Walsh, and he lectures internationally on forensic DNA evidence. For the past three years he has been a judge of the Superior Court in San Diego County.