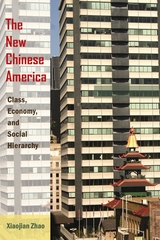 The 1965 Immigration Act altered the lives and outlook of Chinese Americans in fundamental ways. The New Chinese America explores the historical, economic, and social foundations of the Chinese American community, in order to reveal the emergence of a new social hierarchy after 1965.

In this detailed and comprehensive study of contemporary Chinese America, Xiaojian Zhao uses class analysis to illuminate the difficulties of everyday survival for poor and undocumented immigrants and analyzes the process through which social mobility occurs. Through ethnic ties, Chinese Americans have built an economy of their own in which entrepreneurs can maintain a competitive edge given their access to low-cost labor; workers who are shut out of the mainstream job market can find work and make a living; and consumers can enjoy high quality services at a great bargain. While the growth of the ethnic economy enhances ethnic bonds by increasing mutual dependencies among different groups of Chinese Americans, it also determines the limits of possibility for various individuals depending on their socioeconomic and immigration status.

AUTHOR BIOGRAPHY
Xiaojian Zhao is an associate professor in the department of Asian American studies at the University of California, Santa Barbara. She is the author of Remaking ChineseAmerica: Immigration, Family, and Community, 1940û1965 (Rutgers University Press), winner of the History Book Award from the Association of Asian American Studies.
TABLE OF CONTENTS
Contents
Acknowledgments
Note on Transliteration
Introduction: Rethinking Chinese America
1. Contemporary Chinese American Population: The Documented and the Invisible
2. Drawing Lines of Class Distinction
3. "Serve the People": The Ethnic Economy
4. The "Spirit of Changle": Constructing a Regional Identity
5. Surviving Poverty in an Ethnic Social Hierarchy
Conclusion: Inclusion or Exclusion?
Notes
Selected Bibliography
Index