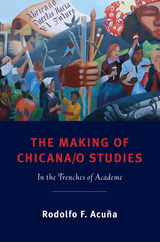 The Making of Chicana/o Studies traces the philosophy and historical development of the field of Chicana/o studies from precursor movements to the Civil Rights era to today, focusing its lens on the political machinations in higher education that sought to destroy the discipline. As a renowned leader, activist, scholar, and founding member of the movement to establish this curriculum in the California State University system, which serves as a model for the rest of the country, Rodolfo F. Acuña has, for more than forty years, battled the trend in academia to deprive this group of its academic presence.

The book assesses the development of Chicana/o studies (an area of studies that has even more value today than at its inception)--myths about its epistemological foundations have remained uncontested. Acuña sets the record straight, challenging those in the academy who would fold the discipline into Latino studies, shadow it under the dubious umbrella of ethnic studies, or eliminate it altogether.

Building the largest Chicana/o studies program in the nation was no easy feat, especially in an atmosphere of academic contention. In this remarkable account, Acuña reveals how California State University, Northridge, was instrumental in developing an area of study that offers more than 166 sections per semester, taught by 26 tenured and 45 part-time instructors. He provides vignettes of successful programs across the country and offers contemporary educators and students a game plan--the mechanics for creating a successful Chicana/o studies discipline--and a comprehensive index of current Chicana/o studies programs nationwide.

Latinas/os, of which Mexican Americans are nearly seventy percent, comprise a complex sector of society projected to be just shy of thirty percent of the nation's population by 2050. The Making of Chicana/o Studies identifies what went wrong in the history of Chicana/o studies and offers tangible solutions for the future.

Rodolfo F. Acuña is a professor of Chicana/o studies at California State University, Northridge. He is the author of numerous books, among them Occupied America: A History of Chicanos, Anything but Mexican: Chicanos in Contemporary Los Angeles, and Corridors of Migration.

"No one knows trench warfare better than Rodolfo Acuña. And no one is better at describing it. An absorbing tale."

"Pioneering Chicana/o studies activist Acuña has produced a rousing defense of Chicana/o studies past, present, and future. He argues persuasively that a main mission of Chicana/o studies has been, and must continue to be, to improve the educational and life opportunities of Chicanas and Chicanos. As anti-immigrant and, specifically, anti-Mexican fervor continues unabated nationwide, his urgent tone hardly seems unjustified. Recommended."
— Choice

"The Making of Chicana/o Studies is the first major history of Chicano studies written by a founder of the field. Acuña has done a good job."
— Journal of American History