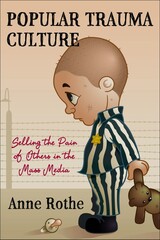 In Popular Trauma Culture, Anne Rothe argues that American Holocaust discourse has a particular plot structure—characterized by a melodramatic conflict between good and evil and embodied in the core characters of victim/survivor and perpetrator—and that it provides the paradigm for representing personal experiences of pain and suffering in the mass media. The book begins with an analysis of Holocaust clichés, including its political appropriation, the notion of vicarious victimhood, the so-called victim talk rhetoric, and the infusion of the composite survivor figure with Social Darwinism. Readers then explore the embodiment of popular trauma culture in two core mass media genres: daytime TV talk shows and misery memoirs.

Rothe conveys how victimhood and suffering are cast as trauma kitsch on talk shows like Oprah and as trauma camp on modern-day freak shows like Springer. The discussion also encompasses the first scholarly analysis of misery memoirs, the popular literary genre that has been widely critiqued in journalism as pornographic depictions of extreme violence. Currently considered the largest growth sector in book publishing worldwide, many of these works are also fabricated. And since forgeries reflect the cultural entities that are most revered, the book concludes with an examination of fake misery memoirs.

ANNE ROTHE is an assistant professor of German at Wayne State University.

REVIEWS
"This is a passionate book of exemplary moral integrity. Anne Rothe provides a straightforward, unflinching indictment of the way that contemporary mass culture gorges itself on the display of human suffering."
— Wulf Kansteiner, Binghamton University, SUNY