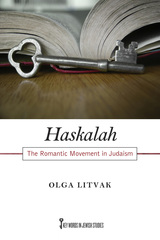 Commonly translated as the “Jewish Enlightenment,” the Haskalah propelled Jews into modern life. Olga Litvak argues that the idea of a Jewish modernity, championed by adherents of this movement, did not originate in Western Europe’s age of reason. Litvak contends that the Haskalah spearheaded a Jewish religious revival, better understood against the background of Eastern European Romanticism.

Based on imaginative and historically grounded readings of primary sources, Litvak presents a compelling case for rethinking the relationship between the Haskalah and the experience of political and social emancipation. Most importantly, she challenges the prevailing view that the Haskalah provided the philosophical mainspring for Jewish liberalism.

In Litvak’s ambitious interpretation, nineteenth-century Eastern European intellectuals emerge as the authors of a Jewish Romantic revolution. Fueled by contradictory longings both for community and for personal freedom, the poets and scholars associated with the Haskalah questioned the moral costs of civic equality and the achievement of middle-class status. In the nineteenth century, their conservative approach to culture as the cure for the spiritual ills of the modern individual provided a powerful argument for the development of Jewish nationalism. Today, their ideas are equally resonant in contemporary debates about the ramifications of secularization for the future of Judaism.

OLGA LITVAK is the Leffell Chair in Modern Jewish History at Clark University. She is the author of Conscription and the Search for Modern Russian Jewry.

REVIEWS
"Olga Litvak marshals stunning erudition in a nigh-magical fashion as she revises the reigning conception of the Haskalah as a Jewish version of the European Enlightenment."
— Paul Mendes-Flohr, University of Chicago Divinity School

"An impressive and largely successful attempt at revisiting a central and important concept in Jewish history and historiography."
— European Review of History

"Anchored in the rhetoric of the maskilic text, Litvak's work amount to a compelling picture of Jewish modernity, a torn and ambivalent modernity that hopes to keep the Haskalah as a restraining fantasy, an expression of incessant critique of the various facts of modernity."
— Studies in Contemporary Jewry