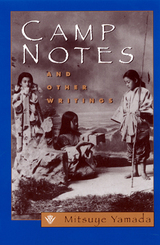 Two collections by an important Asian American writer -- Camp Notes and Other Poeems and Desert Run: Poems and Stories -- return to print in one volume.

Mitsuye Yamada was born in Kyushu, Japan, and raised in Seattle, Washington, until the outbreak of World War II when her family was removed to a concentration camp in Idaho. Camp Notes and Other Writings recounts this experience.

Yamada's poetry yields a terse blend of emotions and imagery. Her twist of words creates a twist of vision that make her poetry come alive. The weight of her cultural experience-the pain of being perceived as an outsider all of her life-permeates her work.

"The core poems of Camp Notes and the title come from the notes I had taken when I was in camp, and it wasn’t published until thirty years after most of it was written. I was simply describing what was happening to me, and my thoughts. But, in retrospect, the collection takes on a kind of expanded meaning about that period in our history. As invariably happens, because Japanese American internment became such an issue in American history, I suppose I will be forever identified as the author of Camp Notes. Of course, I try to show that it’s not the only thing I ever did in my whole life; I did other things besides go to an internment camp during World War II. So, in some ways I keep producing to counteract that one image that gets set in the public mind. At the time that I was writing it, I wasn’t necessarily a political person. Now, when I reread it, even to myself, I think it probably has a greater warning about the dangers of being not aware, not aware of one’s own rights, not aware of helping other people who may be in trouble. I think that it does speak to our present age very acutely." -- Mitsuye Yamada, "You should not be invisible”: An Interview with Mitsuye Yamada, Contemporary Women's Writing, March 2014, Vol. 8 Issue 1

Read the whole interview at: https://academic.oup.com/cww/article/8/1/1/414906/You-should-not-be-invisible-An-Interview-with

AUTHOR BIOGRAPHY
MITSUYE YAMADA is the founder of MultiCultural Women Writers and co-editor of an anthology of the group's work, Sowing Ti Leaves: Writings by MultiCultural Women.
REVIEWS
"Whether she writes from the landscape of the desert, the interiors of home, or the struggle of Japanese Americans, Mitsuye Yamada's poetry is a gift to American literature."
— Nellie Wong

"Her reflections of the camp are vivid, pain-filled, weighed with irony ... She confronts the invisibility of Asian American women in American Culture."
— Los Angeles Times