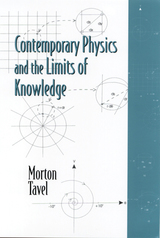 Introductory physics is not often a popular class among liberal arts majors. With its lively prose and analogies from the arts, humanities, and social sciences, however, Contemporary Physics and the Limits of Knowledge is guaranteed to enlighten and delight nonscience majors. Morton Tavel contends that every one of the six topics that he explores--symmetry, special and general relativity, statistical physics, quantum mechanics, and chaos--has played a role in telling us what we are unable to know about the physical world. He explains what each of the topics reveals about our attempts to pinpoint reality, and how each scientific revelation forces us to acknowledge a narrowing rather than a broadening of our knowledge. Chaos theory, for example, reveals a way to understand the randomness that seems so prevalent in natural phenomena such as weather. This development unifies our understanding of many phenomena that had been previously thought unrelated. Yet, chaos represents a significant diminution in what we can hope to predict about the course of natural events. It has increased our knowledge or understanding of a phenomena, but has seriously eroded our long-held, Newtonian vision of prediction and control. Tavel emphasizes the features of physics that make it a very human endeavor and serve to build bridges to all other intellectual disciplicnes.
AUTHOR BIOGRAPHY
Morton Tavel is a professor of physics at Vassar College.
TABLE OF CONTENTS