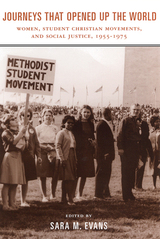 This volume contains inspiring memoirs from sixteen women active in the civil rights movement, anti-war campaigns, and the rise of feminism in the Cold War era. It places religious activism at the center of social movements previously thought of as largely secular.

For thousands of young women in the 1950s and 1960s, involvement with the student Christian movement (SCM) changed their worldviews. Religious organizations fostered women’s leadership at a time when secular groups like Students for a Democratic Society, and the Left in general, relegated most female participants to stereotypical roles.

The SCM introduced young women to activism in other parts of the country and around the world. As leaders, thinkers, and organizers, they encountered the social realities of poverty and racial prejudice and worked to combat them. The SCM took women to Selma and Montgomery, to Africa and Latin America, and to a lifelong commitment to work for social justice.

AUTHOR BIOGRAPHY
Sara M. Evans teaches women’s history at the University of Minnesota, where she is a Distinguished McKnight University Professor. She is the author of Personal Politics: The Roots of Women’s Liberation in the Civil Rights Movement and the New Left, Born for Liberty: A History of Women in America, and Tidal Wave: How Women Changed America at Century’s End