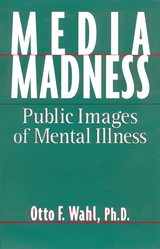 "Media Madness is a most timely, readable, and useful book, exposing, as it does, the myths about mental illness that most of us live by--myths that are as destructive as they are pervasive. Wahl is especially good at showing, in detail, the many ways in which false views of mental illness, purveyed in the media, shape the ways even the most enlightened of us view the world around us. A most thoughtful, stimulating book, from which I learned a great deal." --Jay Neugeboren, author of Imagining Robert: My Brother, Madness, and Survival--A Memoir

"An outstanding book . . . well-researched . . . it is 'must reading.'" --Laurie Flynn, former executive director, National Alliance for the Mentally Ill "The rampant inaccuracies about mental illnesses in newspapers, magazines, movies, and books make it clear that this is not merely stereotyping, but rather a pervasive ignorance. Dr. Wahl's book goes far to explain where the errors are and to educate and sensitize the reader to frequent inaccuracies. In addition, the book is very readable." --NAMI Advocate

"What do the media have to do with one's perception of mental illness? Wahl takes an in-depth look a how unfavorable public images of mental illness are often inaccurate. Statistics show that one out of every five people in the U.S. will experience a psychiatric illness. With boldness and sensitivity, Wahl takes a powerful look at the inaccurate stereotypes created by the media."