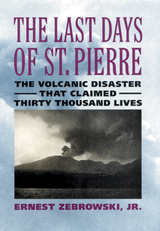 On May 8, 1902, Mont Pelée on the island of Martinique exploded. A deadly cloud of steam and ash churned through plantations and villages, flattened the grand city of St. Pierre, then thundered into the bay where it sank eighteen ships and hundreds of smaller craft. Within a minute or two, nearly 30,000 humans died. The splintered rubble of their homes and belongings burned for three days, and the world began to understand the awesome power of nuées ardentes, glowing avalanches of hot gas and debris that sweep down the slopes of volcanoes, instantly steaming to death anything in its path. The enormous death toll was particularly tragic because it was avoidable. Had it not been for an unfortunate combination of scientific misjudgment and political hubris, most of the victims would have escaped.

In The Last Days of St. Pierre, Ernest Zebrowski Jr. counts down the days leading up to the catastrophe, and unfolds a tale intertwining human foolishness and heroism with the remarkable forces of nature. Illustrations contrast life in Martinique before and after the eruption, and eyewitness accounts bring the story to life.

Although it seems a long time since the destruction of St. Pierre, it is a mere blink of an eye in our planet’s geological history. Mont Pelée will erupt again, as will Vesuvius, Krakatau, St. Helens, Thera, and most other infamously fatal volcanoes, and human lives will again be threatened. The St. Pierre disaster has taught us much about the awesome power of volcanic forces and the devastation they can bring.