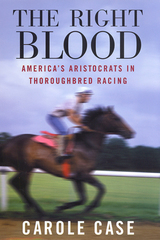 The spectacle of thoroughbred horses dashing powerfully and gracefully down the track is one of the most stimulating and beautiful of all athletic events. Yet despite its mass appeal, an elite group of men and a few women have traditionally controlled the sport. What are the origins and personalities behind the sport in America?

In The Right Blood, Carole Case examines the history of American thoroughbred racing, in particular the story behind the Jockey Club. Formed in 1894 by the nation’s richest, most powerful, and often most notorious men, the Jockey Club continues to this day to exert a formidable influence on this “sport of kings.”

Using Jockey Club documents and personal interviews, Case traces the history of how club members created and enforced the rules governing racing, from the first decades of the twentieth century to the present day. She tells of how club members once assigned racing dates, issued licenses, appointed judges, and dictated who could train, ride, and own thoroughbred horses. Case also describes how many of them exploited the poor to work their horses, defeated those who posed a threat to their interests, and excluded people of different backgrounds from horse racing ¾ all in the name of improving the breed and promoting the sport. The Jockey Club maintained this stranglehold on the sport until 1950, when an appellate court took away its licensing power. Perhaps most interestingly, the men of the Jockey Club became and continue as keepers of the registry of North American thoroughbred horses, The American Stud Book, determining which horses can ¾ and cannot ¾ be considered thoroughbreds.

Written for the general reader interested in the sport and its culture, The Right Blood is an engaging look behind the scenes of American horse racing.

AUTHOR BIOGRAPHY
Carole Case is a sociologist and author of Down the Backstretch: Racing and the American Dream and The Black Book and the Mob: The Untold Story of the Control of Nevada's Casinos .
REVIEWS
A fascinating and eye-opening dissection of the small world of big-time racing. IÆm surprised itÆs never been written before.
— Stephen Birmingham, author of Our Crowd: The Great Jewish Families of New York and The Wrong Kind o