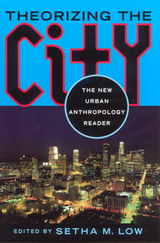 Anthropological perspectives are not often represented in urban studies, even though many anthropologists have been contributing actively to theory and research on urban poverty, racism, globalization, and architecture. The New Urban Anthropology Reader corrects this omission by presenting 12 cross-cultural case studies focusing on the analysis of space and place.

Five images of the city—the divided city, the contested city, the global city, the modernist city, and the postmodern city—serve as the framework for the selected essays. These images highlight current research trends in urban anthropology, such as poststructural studies of race, class, and gender in the urban context; political economic studies of transnational culture; and

studies of the symbolic and social production of urban space and planning.

Theorizing the City: An Introduction by Setha M. Low

Part I. The Divided City

The Changing Significance of Race and Class in an African American Community, Steven Gregory

AUTHOR BIOGRAPHY
Setha M. Low is professor of environmental psychology and anthropology and director of the Public Space Research Group at the Graduate School and University Center of the City University of New York. She is the co-author of Children of the Urban Poor, and of many other books on urban and social issues.