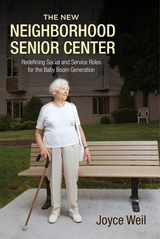 In 2011, seven thousand American “baby boomers” (those born between 1946 and 1964) turned sixty-five daily. As this largest U.S. generation ages, cities, municipalities, and governments at every level must grapple with the allocation of resources and funding for maintaining the quality of life, health, and standard of living for an aging population.
In The New Neighborhood Senior Center, Joyce Weil uses in-depth ethnographic methods to examine a working-class senior center in Queens, New York. She explores the ways in which social structure directly affects the lives of older Americans and traces the role of political, social, and economic institutions and neighborhood processes in the decision to close such centers throughout the city of New York.
Many policy makers and gerontologists advocate a concept of “aging in place,” whereby the communities in which these older residents live provide access to resources that foster and maintain their independence. But all “aging in place” is not equal and the success of such efforts depends heavily upon the social class and availability of resources in any given community. Senior centers, expanded in part by funding from federal programs in the 1970s, were designed as focal points in the provision of community-based services. However, for the first wave of “boomers,” the role of these centers has come to be questioned.
Declining government support has led to the closings of many centers, even as the remaining centers are beginning to “rebrand” to attract the boomer generation. However, The New Neighborhood Senior Centerdemonstrates the need to balance what the boomers’ want from centers with the needs of frailer or more vulnerable elders who rely on the services of senior centers on a daily basis. Weil challenges readers to consider what changes in social policies are needed to support or supplement senior centers and the functions they serve.
AUTHOR BIOGRAPHY
JOYCE WEIL is an assistant professor of gerontology at the University of Northern Colorado.
REVIEWS
"Weil asks interesting questions about structure and agency in relation to senior centers—particularly so in a time when delivery of services to older adults is changing. Her senior center is an important focal point for looking at the larger issues around funding, services, community, and the social connections of elders."
— Meika Loe, author of Aging Our Way: Lessons for Living from 85 and Beyond

"Weil has made a significant contribution to the field of gerontology in her engaging and comprehensive book. She captures the essence of 'old meets new' and tackles important issues related to the 'new old' and the 'new senior center.'  A must read for students, faculty, and anyone who plans on living a long life."
— Donna L. Wagner, President of the Association for Gerontology in Higher Education

"A thorough and multilayered analysis of senior centers at an important time in policy for social service resources for older Americans. Weil delivers a scholarly treatment of how senior centers are inherently part of their community and involved in a complex web of social, cultural, economic, political, and policy factors that determine and shape their viability. Highly recommended."
— Choice

"This book taught me a lot about senior centers. It is accessibly written and suitable for undergraduate classes, while scholars interested in gerontology, aging and the life course, and public health will find this book a useful contribution to our understanding of senior centers in a community context."
— American Journal of Sociology

TABLE OF CONTENTS
Title Page
Copyright
Contents
List of Tables
Preface
Acknowledgments
Introduction
1. The History of Senior Centers
2. The Case of the Center before Shuttering
3. Reconstructing Shuttering in a Larger Social Context
4. The Case of the Center as It Is Shuttered
5. The Organizational Embeddedness of Capital
6. Poor Centers
7. Reconceptualizing Centers
8. Beyond Rebranding
Appendix A. Self-Reflection
Appendix B: Methods
Notes
References
Index
About the Author