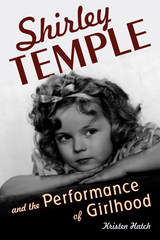 In the 1930s, Shirley Temple was heralded as “America’s sweetheart,” and she remains the icon of wholesome American girlhood, but Temple’s films strike many modern viewers as perverse. Shirley Temple and the Performance of Girlhood examines her early career in the context of the history of girlhood and considers how Temple’s star image emerged out of the Victorian cult of the child.
Beginning her career in “Baby Burlesks,” short films where she played vamps and harlots, her biggest hits were marketed as romances between Temple and her adult male costars. Kristen Hatch helps modern audiences make sense of the erotic undercurrents that seem to run through these movies. Placing Temple’s films in their historical context and reading them alongside earlier representations of girlhood in Victorian theater and silent film, Hatch shows how Shirley Temple emerged at the very moment that long standing beliefs about childhood innocence and sexuality were starting to change. Where we might now see a wholesome child in danger of adult corruption, earlier audiences saw Temple’s films as demonstrations of the purifying power of childhood innocence.
Hatch examines the cultural history of the time to view Temple’s performances in terms of sexuality, but in relation to changing views about gender, class, and race. Filled with new archival research, Shirley Temple and the Performance of Girlhood enables us to appreciate the “simpler times” of Temple’s stardom in all its thorny complexity.
AUTHOR BIOGRAPHY
KRISTEN HATCH is an assistant professor in the department of film and media studies and the Visual Studies Program at the University of California, Irvine.
REVIEWS
"Shirley Temple and the Performance of Girlhood is a provocative and compelling analysis of not just Shirley Temple's stardom but a nexus of issues around childhood and stardom more generally, including the erotics of performance, male child-loving, censorship, and race."
— Pamela Wojcik, University of Notre Dame

"Hatch's work serves as both a specific and well-evidenced case study for scholars interested in understanding Shirley Temple's legacy as well as an effective overview of the changing concept of white American girlhood in the nineteenth and twentieth centuries."
— Film Quarterly

"What a pleasure to see the recent expansion of scholarship on Shirley Temple. Kristen Hatch's contribution is both substantive and subtle—her analysis of gender and age in early Hollywood bears strongly on our current moment."
— Diane Negra, University College Dublin