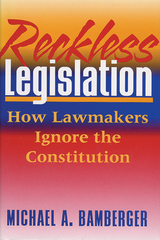 Article 6 of the U.S. Constitution requires that every U.S. Senator and Representative, as well as all members of any state legislature, take an oath or affirmation to support the Constitution. Legislators, after all, must accept the basic principles embodied in the Constitution and Bill of Rights when interpreting questions of law. The only way to change these principles is through amendments to the Constitution. But in an increasing number of cases, contends Michael A, Bamberger, our legislators are knowingly abdicating their responsibility to uphold the Constitution. Instead of considering the constitutionality of legislation, they vote for what is politically expedient and popular, leaving it to the courts to determine the legality of their actions. Bamberger argues that legislators have a duty to consider constitutionality and not “pass the buck” to the judiciary regardless of political pressures or even well-meaning intentions to achieve desirable policy objectives.

Reckless Legislation examines legislative consideration and avoidance of issues of constitutionality through a number of examples: the regulation of the Internet by Congress and two state legislatures; the reliance by legislatures of Minneapolis, Indianapolis, and Tennessee on “experts” to justify passage of unconstitutional laws; the repeated passage of unconstitutional laws in New York and Missouri relating, respectively, to religion and abortion to wear down the courts and the opposition; and the efforts by Congress to reverse Supreme Court decisions believed by it to be incorrect or harmful.

Bamberger urges legislators to avoid the political motives that lead to “reckless legislation,” recommending that they “make full use of the full panoply of available support services . . . for a better and deeper knowledge of the issues raised.”