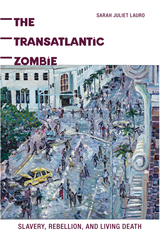 Our most modern monster and perhaps our most American, the zombie that is so prevalent in popular culture today has its roots in African soul capture mythologies. The Transatlantic Zombie provides a more complete history of the zombie than has ever been told, explaining how the myth’s migration to the New World was facilitated by the transatlantic slave trade, and reveals the real-world import of storytelling, reminding us of the power of myths and mythmaking, and the high stakes of appropriation and homage.

Beginning with an account of a probable ancestor of the zombie found in the Kongolese and Angolan regions of seventeenth-century Africa and ending with a description of the way, in contemporary culture, new media are used to facilitate zombie-themed events, Sarah Juliet Lauro plots the zombie’s cultural significance through Caribbean literature, Haitian folklore, and American literature, film, and the visual arts. The zombie entered US consciousness through the American occupation of Haiti, the site of an eighteenth-century slave rebellion that became a war for independence, thus making the figuration of living death inseparable from its resonances with both slavery and rebellion. Lauro bridges African mythology and US mainstream culture by articulating the ethical complications of the zombie as a cultural conquest that was rebranded for the American cinema.

As The Transatlantic Zombie shows, the zombie is not merely a bogeyman representing the ills of modern society, but a battleground over which a cultural war has been fought between the imperial urge to absorb exotic, threatening elements, and the originary, Afro-diasporic culture’s preservation through a strategy of mythic combat.
AUTHOR BIOGRAPHY
SARAH JULIET LAURO is an assistant professor at the University of Tampa, Florida. She is the coeditor of Better off Dead: The Evolution of Zombie as Posthuman.
REVIEWS
"Simply put, this is a tremendous—even epic—study of the zombie in a range of literary, cinematic, political, and popular contexts. A groundbreaking work!"
— Aviva Briefel, Bowdoin College

"This meticulously researched and exhaustive study is an invaluable offering to both Haitian and humanist scholarship. The historical depth and cultural breadth call attention to the zombie's impact as real social phenomenon and as provocative metaphor for the human condition."
— Kaiama L. Glover, author of Haiti Unbound: A Spiralist Challenge to the Postcolonial Canon