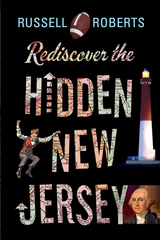 Did you know—
—that a New Jerseyan was the first president of the United States?
—that New Jersey was the site of the first organized college football game?
—that New Jersey was the location of one of the most devastating espionage attacks of World War I?
—that the heroics of a New Jersey woman saved thousands of people from dying of yellow fever?
—that one of the first American folk heroes lived in New Jersey—and jumped off waterfalls?
These and other fascinating stories can be found in the newly updated Rediscover the Hidden New Jersey, a treasury of New Jersey stories that celebrate the unique heritage and importance of the Garden State. Russell Roberts has scoured New Jersey, from High Point to Cape May, to bring readers a delightful potpourri of facts, essays, lists, photos, stories, and legends about New Jersey. Readers will learn how New Jersey used to be the center of the motion picture universe, the origin of the Jersey Devil and other popular tall tales, where Norman Mailer and Abbot & Costello were born, where Aaron Burr and Leo, the M-G-M lion, lie buried, and much more. Learn about the geology of New Jersey, find out about the state’s ever-changing weather, and how New Jersey was chosen for the famous (or infamous) War of the Worlds radio broadcast that panicked the nation. All this and more is in Rediscover the Hidden New Jersey, the ultimate New Jersey book.
This revised edition contains new sections on Lawnside, the Morris Canal, Albert Einstein in Princeton, The Bordentown Manual Training School, Rockefeller/Ocean County Park, the bicycle railroad, Morro Castle, Alice Paul, and more.
AUTHOR BIOGRAPHY
RUSSELL ROBERTS is a freelance writer who has lived in New Jersey all his life and now resides in Bordentown. He is the coauthor of Down the Jersey Shore (Rutgers University Press) and many other books for adults and children.
TABLE OF CONTENTS
Series Page
Title Page
Copyright
Contents
Preface to the Second Edition
1. New Jersey Firsts
2. The Rocks, the Land, and Other Things
3. Interesting People
4. The Sporting Life
5. Canning, Building, Riding, and Other Fascinating Things About New Jersey
6. Celebrated Sons and Distinguished Daughters
7. Great Storms
8. Ghosts, Tall Tales, and Legends
9. Historical Happenings
10. A Town Treasury
11. When New Jersey Was Hollywood
12. It’s the Natural Thing to Do
13. Roads, Bridges, and Tunnels
14. The Call of the Pines
15. Birthplaces and Burial Sites
Bibliography
Index
About the Author