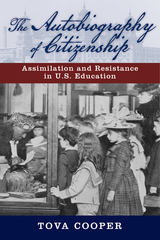 At the turn of the twentieth century, the United States was faced with a new and radically mixed population, one that included freed African Americans, former reservation Indians, and a burgeoning immigrant population.  In The Autobiography of Citizenship, Tova Cooper looks at how educators tried to impose unity on this divergent population, and how the new citizens in turn often resisted these efforts, reshaping mainstream U.S. culture and embracing their own view of what it means to be an American.
The Autobiography of Citizenship traces how citizenship education programs began popping up all over the country, influenced by the progressive approach to hands-on learning popularized by John Dewey and his followers. Cooper offers an insightful account of these programs, enlivened with compelling readings of archival materials such as photos of students in the process of learning; autobiographical writing by both teachers and new citizens; and memoirs, photos, poems, and novels by authors such as W.E.B. Du Bois, Jane Addams, Charles Reznikoff, and Emma Goldman. Indeed, Cooper provides the first comparative, inside look at these citizenship programs, revealing that they varied wildly: at one end, assimilationist boarding schools required American Indian children to transform their dress, language, and beliefs, while at the other end the libertarian Modern School encouraged immigrant children to frolic naked in the countryside and learn about the world by walking, hiking, and following their whims.
Here then is an engaging portrait of what it was like to be, and become, a U.S. citizen one hundred years ago, showing that what it means to be “American” is never static.
AUTHOR BIOGRAPHY
TOVA COOPER is an assistant professor of English at the University of South Florida, Tampa.
REVIEWS
"A refreshing and compelling study … and one that contributes to an important intersection between the fields of education and multi-ethnic literary studies."
— MELUS

“The Autobiography of Citizenship grants us access to a range of fascinating archives and makes a valuable contribution to American literary studies, ethnic studies, and history.”
— Sarah Wilson, author of Melting-Pot Modernism

"Tova Cooper details how minorities—Native, African, and Jewish Americans—used literature to cope with the modern U.S. demand that they assimilate or disappear entirely. How these writers and intellectuals overcame their formal educations to teach us different lessons is a heroic story."
— John Carlos Rowe, University of Southern California