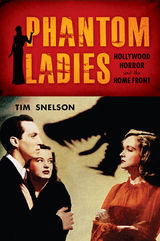 Defying industry logic and gender expectations, women started flocking to see horror films in the early 1940s. The departure of the young male audience and the surprise success of the film Cat People convinced studios that there was an untapped female audience for horror movies, and they adjusted their production and marketing strategies accordingly.

Phantom Ladies reveals the untold story of how the Hollywood horror film changed dramatically in the early 1940s, including both female heroines and female monsters while incorporating elements of “women’s genres” like the gothic mystery. Drawing from a wealth of newly unearthed archival material, from production records to audience surveys, Tim Snelson challenges long-held assumptions about gender and horror film viewership.

Examining a wide range of classic horror movies, Snelson offers us a new appreciation of how dynamic this genre could be, as it underwent seismic shifts in a matter of months. Phantom Ladies, therefore, not only includes horror films made in the early 1940s, but also those produced immediately after the war ended, films in which the female monster was replaced by neurotic, psychotic, or hysterical women who could be cured and domesticated. Phantom Ladies is a spine-tingling, eye-opening read about gender and horror, and the complex relationship between industry and audiences in the classical Hollywood era.
AUTHOR BIOGRAPHY
TIM SNELSON is a lecturer in media history at the University of East Anglia in Norwich, England.
REVIEWS
"One of the freshest, most vibrant books examining how feminine audiences and the demands of wartime shaped the horror and fantasy films of World War II. Absolutely compelling reading, this is a page turner in every sense of the word!"
— Wheeler Winston Dixon, author of A Short History of Film

“In this lively, original work, Tim Snelson examines the female-monster movie cycle that emerged in Hollywood during World War II. This fresh and compelling look at popular culture during the war years is a win for the reader.”
— Stephen Prince, author of Digital Visual Effects in Cinema: The Seduction of Reality

"Snelson’s deft film analysis and evocative historical detail takes us beyond the clichés of male horror/female melodrama: a compelling account of wartime women, both on film and in theatres."
— Yvonne Tasker, author of Soldiers’ Stories: Military Women in Cinema and Television since WWII

"Classic movie buffs and B-movie fans will find Phantom Ladies of considerable interest. Students of Women's Studies can discover an intriguing example of the perenially recurring 'Woman Question' from the novel persepcetive of a cycle of WWII monster movie aimed at American women."
— Cineaste