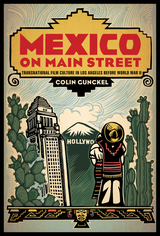 In the early decades of the twentieth-century, Main Street was the heart of Los Angeles’s Mexican immigrant community. It was also the hub for an extensive, largely forgotten film culture that thrived in L.A. during the early days of Hollywood. Drawing from rare archives, including the city’s Spanish-language newspapers, Colin Gunckel vividly demonstrates how this immigrant community pioneered a practice of transnational media convergence, consuming films from Hollywood and Mexico, while also producing fan publications, fiction, criticism, music, and live theatrical events.
Mexico on Main Street locates this film culture at the center of a series of key debates concerning national identity, ethnicity, class, and the role of Mexicans within Hollywood before World War II. As Gunckel shows, the immigrant community’s cultural elite tried to rally the working-class population toward the cause of Mexican nationalism, while Hollywood sought to position them as part of a lucrative transnational Latin American market. Yet ironically, both Hollywood studios and Mexican American cultural elites used the media to present negative depictions of working-class Mexicans, portraying their behaviors as a threat to middle-class respectability. Rather than simply depicting working-class immigrants as pawns of these power players, however, Gunckel reveals their active participation in the era’s film culture.
Gunckel’s innovative approach combines media studies, urban history, and ethnic studies to reconstruct a distinctive, richly layered immigrant film culture. Mexico on Main Street demonstrates how a site-specific study of cultural and ethnic issues challenges our existing conceptions of U.S. film history, Mexican cinema, and the history of Los Angeles.
AUTHOR BIOGRAPHY
COLIN GUNCKEL is an assistant professor of screen arts and cultures, American culture, and Latina/o Studies at the University of Michigan, Ann Arbor. He serves as associate editor of the A Ver: Revisioning Art History series.
REVIEWS
"A rich and impressive study of how Mexican film culture in Los Angeles responded to and shaped film industries of both the U.S. and Mexico."
— Jacqueline Stewart, author of Migrating to the Movies: Cinema and Black Urban Modernity

"This provocative book should inspire many other works on the topic."
— CHOICE

"Gunckel has a grand architectural eye, and has provided maps and photos of the dozens of theaters and entertainment venues along Main Street. But his real strength is in his narrative power."
— Somos en escrito

"One of the most impressive contributions this book makes to the field of film and media studies is its reminder that film and film culture exist in relation to broader cultural and social configurations such as immigration."
— Film Quarterly

"Mexico on Main Street is an engaging and thought provoking text that makes major contributions to overlapping areas of film studies."
— Vivomatografias

Acknowledgments
Introduction
1    Constructing Mexican Los Angeles: Competing Images of an Immigrant Population
2   “Spectacles of High Morality and Culture”: Theatrical Culture and Aspirations of Mexican Community in the 1920s
3   The Audible and the Invisible: The Transition to Sound and “De-Mexicanization” of Hollywood
4   “Fashionable Charros and Chinas Poblanas”: Mexican Cinema and the Dilemma of the Comedia Ranchera
5   “Now We Have Mexican Cinema”?: Navigating Transnational Mexicanidad in a Moment of Crisis
Conclusion: Hola México/Hello Mexico
Notes
Bibliography
Index