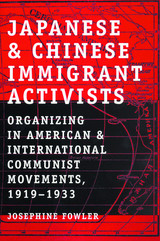 Japanese and Chinese immigrants in the United States have traditionally been characterized as hard workers who are hesitant to involve themselves in labor disputes or radical activism. How then does one explain the labor and Communist organizations in the Asian immigrant communities that existed from coast to coast between 1919 and 1933? Their organizers and members have been, until now, largely absent from the history of the American Communist movement. In Japanese and Chinese Immigrant Activists, Josephine Fowler brings us the first in-depth account of Japanese and Chinese immigrant radicalism inside the United States and across the Pacific.

Drawing on multilingual correspondence between left-wing and party members and other primary sources, such as records from branches of the Japanese Workers Association and the Chinese Nationalist Party, Fowler shows how pressures from the Comintern for various sub-groups of the party to unite as an “American” working class were met with resistance. The book also challenges longstanding stereotypes about the relationships among the Communist Party in the United States, the Comintern, and the Soviet Party.