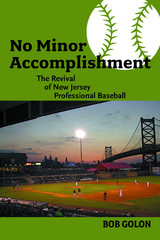 America's pastime has roots in New Jersey dating back to 1846 when the first baseball game using modern rules was played on Elysian Fields in Hoboken. The sport thrived throughout the state until the 1950s when fans began to turn away from local competition, preferring to watch games broadcast on television, to take a trip to see a major league team in New York, or to frequent newly air-conditioned movie theaters or bowling alleys. By the early 1990s, however, a growing disenchantment with the high ticket prices and corporate atmosphere of Major League Baseball led to the revival of a purer form of the sport in the Garden State.

In No Minor Accomplishment, sports historian and New Jersey native Bob Golon tells the story of the state's baseball scene since the Trenton Thunder arrived in 1994. Drawing on interviews with team owners and employees, industry executives and fans, Golon goes behind the scenes to show how maintaining a minor league ball club can be a risky business venture. Stadiums cost millions to build, and a team full of talented players does not immediately guarantee success. Instead, each of the eight minor league and independent professional teams in the state must tailor themselves to the communities in which they are situated. Shrewd marketing is necessary to attract fans, but Golon also explains how, unlike Major League Baseball, the business aspect of the minor and independent leagues is not something the average spectator notices.  For the fans, baseball in New Jersey is wholesome, exciting family entertainment.
REVIEWS
No Minor Accomplishmentprovides great insight into the workings of independent and minor league baseball in New Jersey.
— Bob Wirz, Independent Baseball Insider columnist