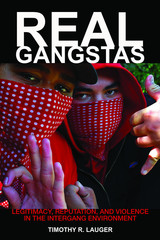 Street gangs are a major concern for residents in many inner-city communities. However, gangs’ secretive and, at times, delinquent tendencies limit most people’s exposure to the realities of gang life. Based on eighteen months of qualitative research on the streets of Indianapolis, Real Gangstas provides a unique and intimate look at the lives of street gang members as they negotiate a dangerous peer environment in a major midwestern city.

Timothy R. Lauger interviewed and observed a mix of fifty-five gang members, former gang members, and non-gang street offenders. He spent much of his fieldwork time in the company of a particular gang, the “Down for Whatever Boyz,” who allowed him to watch and record many of their day-to-day activities and conversations. Through this extensive research, Lauger is able to understand and explain the reasons for gang membership, including a chaotic family life, poverty, and the need for violent self-assertion in order to foster the creation of a personal identity.

Although the book exposes many troubling aspects of gang life, it is not a simple descriptive or a sensationalistic account of urban despair and violence. Steeped in the tradition of analytical ethnography, the study develops a central theoretical argument: combinations of street gangs within cities shape individual gang member behavior within those urban settings. Within Indianapolis, members of rival gangs interact on a routine basis within an ambiguous and unstable environment. Participants believe that many of their contemporaries claiming gang affiliations are not actually “real” gang members, but instead are imposters who gain access to the advantages of gang membership through fraud and pretense. Consequently, the ability to discern “real” gang members—or to present oneself successfully as a real gang member—is a critical part of gangland Indianapolis.

Real Gangstas offers an objective and fair characterization of active gang members,  successfully balancing the seemingly conflicting idea that they generally seem like normal teenagers, yet are abnormally concerned with—and too often involved in—violence. Lauger takes readers to the edge of an actual gang conflict, providing a rare and up-close look at the troubling processes that facilitate hostility and violence.

TIMOTHY R. LAUGER is an assistant professor of criminal justice at Niagara University.

REVIEWS
"Lauger's book, a nuanced excavation of everyday gang life, is required reading for anyone interested in gangs and how they function. It is a considerable achievement."
— Simon Hallsworth, University Campus Ipswich, UK

"Lauger's unique theoretical orientation makes for a compelling, highly readable, and engaging analysis of the gang field."
— Jody Miller, One of the Guys: Girls, Gangs, and Gender