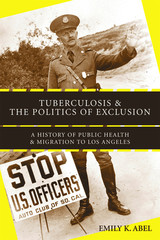 Winner of the 2008 Arthur J. Viseltear Prize from the American Public Health Association and Nominated for the 2008 William H. Welch Medal, AAHM

Though notorious for its polluted air today, the city of Los Angeles once touted itself as a health resort. After the arrival of the transcontinental railroad in 1876, publicists launched a campaign to portray the city as the promised land, circulating countless stories of miraculous cures for the sick and debilitated. As more and more migrants poured in, however, a gap emerged between the city’s glittering image and its dark reality.

Emily K. Abel shows how the association of the disease with “tramps” during the 1880s and 1890s and Dust Bowl refugees during the 1930s provoked exclusionary measures against both groups. In addition, public health officials sought not only to restrict the entry of Mexicans (the majority of immigrants) during the 1920s but also to expel them during the 1930s.

Abel’s revealing account provides a critical lens through which to view both the contemporary debate about immigration and the U.S. response to the emergent global tuberculosis epidemic.

AUTHOR BIOGRAPHY
Emily K. Abel is a professor in the school of public health and women's studies at the University of California, Los Angeles. She is the author and editor of several books, including Suffering in the Land of Sunshine: A Los Angeles Illness Narrative (Rutgers University Press).
REVIEWS
Tuberculosis and the Politics of Exclusion is a thorough and thoroughly engrossing account of the social and political response to tuberculosis in the American West. This well-written, highly accessible yet scholarly and authoritative account is essential for any reader interested in disease, race, public health, and medicine in America. It is a superb addition to the literature.
— Amy L. Fairchild, author of Science at the Borders:Immigrant Medical Inspection and the Shaping o