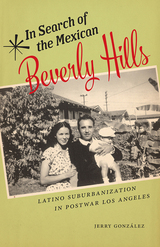 Residential and industrial sprawl changed more than the political landscape of postwar Los Angeles. It expanded the employment and living opportunities for millions of Angelinos into new suburbs. In Search of the Mexican Beverly Hills examines the struggle for inclusion into this exclusive world—a multilayered process by which Mexican Americans moved out of the barrios and emerged as a majority population in the San Gabriel Valley—and the impact that movement had on collective racial and class identity. Contrary to the assimilation processes experienced by most Euro-Americans, Mexican Americans did not graduate to whiteness on the basis of their suburban residence. Rather, In Search of the Mexican Beverly Hills illuminates how Mexican American racial and class identity were both reinforced by and took on added metropolitan and transnational dimensions in the city during the second half of the twentieth century.
AUTHOR BIOGRAPHY
JERRY GONZÁLEZ is an associate professor of history at the University of Texas at San Antonio.
REVIEWS
"By uncovering the hidden story of how Mexican Americans came to dominate the East Los Angeles suburbs, González not only offers much-needed insight into the postwar Mexican American experience, but also bridges Chicana/o and suburban history in critical and heretofore unexplored ways."
— Monica Perales, author of Smeltertown: Making and Remembering a Southwest Border Community

"González has produced a definitive work on the Mexican American suburban experience, full of nuance and surprises, and demanding a deep rethinking of the meaning of the American suburban dream."
— Becky Nicolaides, author of My Blue Heaven: Life and Politics in the Working-Class Suburbs of Los Angeles, 1920-1965

"Documents how Mexican-Americans came to be the majority population in the suburban San Gabriel Valley."
— Chronicle of Higher Education