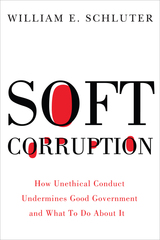 New Jersey has long been a breeding ground for political corruption, and most of it is perfectly legal. Public officials accept favors from lobbyists, give paid positions to relatives, and rig the electoral process to favor their cronies in a system where campaign money is used to buy government results. Such unethical behavior is known as “soft corruption,” and former New Jersey legislator William E. Schluter has been fighting it for the past fifty years.

In this searing personal narrative, the former state senator recounts his fight to expose and reform these acts of government misconduct. Not afraid to cite specific cases of soft corruption in New Jersey politics, he paints a vivid portrait of public servants who care more about political power and personal gain than the public good. By recounting events that he witnessed firsthand in the Garden State, he provides dramatic illustrations of ills that afflict American politics nationwide.

As he identifies five main forms of soft corruption, Schluter diagnoses the state government’s ethical malaise, and offers concrete policy suggestions for how it might be cured. Not simply a dive through the muck of New Jersey politics, Soft Corruption is an important first step to reforming our nation’s political system, a book that will inspire readers to demand that our elected officials can and must do better.

Visit: www.softcorruption.com (http://www.softcorruption.com)
AUTHOR BIOGRAPHY
WILLIAM E. SCHLUTER is a Republican lawmaker who served in both houses of the New Jersey legislature, and authored two pioneering laws regulating lobbying and campaign finance. Subsequently, he served as chair of the Citizens Clean Elections Commission and vice-chair of the State Ethics Commission.
REVIEWS
"An encyclopedia of bad government in New Jersey, from the perspective of a man who had a front row seat to all the dirty dealings."
— U.S. 1 Newspaper

"Soft Corruption should be read by anyone concerned about the appalling lack of ethics in our state's politics. It should be mandatory reading for the thousands of New Jersey elected officials. In fact, the NJ Leage of Municipalities should consider providing copies to each and every elected body in the state and strongly suggest that it be passed around among their members so it can be discussed at widely publicized public meetings."
— The Trenton Times

"Senator Schluter's keen insights into the political process in New Jersey are based on his distinguished career in public service over the last half century.  His book is a must read for every New Jerseyan interested in state electoral reform and ethics in government."
— Leonard Lance, U.S. Representative for New Jersey's 7th district

“Soft corruption has never before been explored or documented so thoroughly and persuasively.  Schluter unflinchingly names names and recounts details to bring soft corruption in New Jersey vividly and compellingly to life."
— Richard L. McCormick, President Emeritus, Board of Governors Professor of History and Education

"A strong critique of corruption, which seeks to restore the promises of effective democracy."
— Gerald Pomper, Board of Governors Professor of Political Science