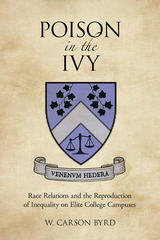 The world of elite campuses is one of rarified social circles, as well as prestigious educational opportunities. W. Carson Byrd studied twenty-eight of the most selective colleges and universities in the United States to see whether elite students’ social interactions with each other might influence their racial beliefs in a positive way, since many of these graduates will eventually hold leadership positions in society. He found that students at these universities believed in the success of the ‘best and the brightest,’ leading them to situate differences in race and status around issues of merit and individual effort.

Poison in the Ivy challenges popular beliefs about the importance of cross-racial interactions as an antidote to racism in the increasingly diverse United States. He shows that it is the context and framing of such interactions on college campuses that plays an important role in shaping students’ beliefs about race and inequality in everyday life for the future political and professional leaders of the nation. Poison in the Ivy is an eye-opening look at race on elite college campuses, and offers lessons for anyone involved in modern American higher education.
AUTHOR BIOGRAPHY
W. CARSON BYRD is an assistant professor of pan-African studies at the University of Louisville in Kentucky.
REVIEWS
"A robust dissection of how educational racial inequality is reproduced under rosy conditions. Staggering in both facts and analysis, Poison in the Ivy will make you jump and twitch, but is so thorough that it guarantees not to leave you itching for more."
— Matthew W. Hughey, author of White Bound: Nationalists, Antiracists, and the Shared Meanings of Race

"Poison in the Ivy is more than a study of how students at highly selective universities interact along racial lines; the book’s insights reach far beyond to the current state of racial inequality more generally.  Byrd examines a group of people – those educated at elite institutions – often held up as a model of sophisticated and liberal racial attitudes.  His careful analysis raises important questions about their actual skills with understanding and navigating current racial realities.  Given that these graduates tend to hold high powered positions in the world post-college, Byrd’s study offers a sobering forecast of what to expect in the years to come.  This is an important book that scholars of race & ethnicity, higher education, and inequality more generally should read immediately."
— Amanda Lewis, author of Race in the Schoolyard: Negotiating the Color-line in Classrooms and Communities

"Drawing on decades of social science research as well as original analyses of campus race relations, W. Carson Byrd, an assistant professor of pan-African studies at the University of Louisville, paints a bleak picture in his new book, Poison in the Ivy"
— Nick Roll, Inside Higher Ed

Forthcoming African American Studies Titles, 2018: A list of the latest and soon-to-be-released publications through October 2018.
— Choice

"Byrd’s analysis convincingly demonstrates that understanding contact alone is insufficient if we do not consider how that context may imbue particular kinds of meanings to those interactions that can enhance or undermine the impact of cross-racial contact. Such insights are important not only to our understanding of higher education but racial inequality more broadly. Without attention to these issues, racial inequality may be perpetuated for decades to come."
— American Journal of Sociology

"We are indebted to Byrd for his exploration of the murky social undercurrents of under-graduate  life.  He  documents  how  the  gap between students of different racial groups that begins at home grows into a chasm in college. Those of us who venture to campus—whether as students, staff, or faculty—should take note of Byrd’s somber and sobering call."
— Contemporary Sociology

"Poison in the Ivy definitively demonstrates that racial attitudes, relationships and outcomes do not simply result from personal choices, but instead are deeply rooted in centuries-old patterns. Economic, political, historical and institutional realities can—and too often do—thwart the best intentioned, "feel good" efforts to change structured racial inequality in America by simply changing individual attitudes and behaviors."
— Review of Higher Education