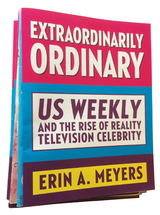 Extraordinarily Ordinary offers a critical analysis of the production of a distinct form of twenty-first century celebrity constructed through the exploding coverage of reality television cast members in Us Weekly magazine. Erin A. Meyers connects the economic and industrial forces that helped propel Us Weekly to the top of the celebrity gossip market in the early 2000s with the ways in which reality television cast members fit neatly into the social and cultural norms that shaped the successful gossip formulas of the magazine. Us Weekly’s construction of the “extraordinarily ordinary” celebrity within its gossip narratives is a significant symptom of the broader intensification of discourses of ordinariness and the private in the production of contemporary celebrity, in which fame is paradoxically grounded in “just being yourself” while simultaneously defining what the “right” sort of self is in contemporary culture.
AUTHOR BIOGRAPHY
Erin A. Meyers is an associate professor of communication at Oakland University in Rochester, Michigan. She is the author of Dishing Dirt in the Digital Age: Celebrity Gossip Blogs and Participatory Media Culture.
REVIEWS
“Highly engaging and readable, Extraordinarily Ordinary is a clear, in-depth analysis of both the celebrity gossip magazine genre and the nature of fame in the 21st century.”
— Andrea McDonnell, coauthor of Celebrity: A History of Fame

"Erin A. Meyers provides a masterful, lively account of reality TV celebrity. Extraordinarily Ordinary is a must-read for anyone eager to understand the meaning and power of celebrity today."
— Julie Wilson, coauthor of Mothering through Precarity: Women’s Work and Digital Media