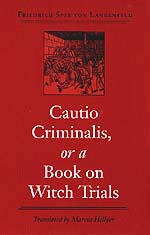 In 1631, at the epicenter of the worst excesses of the European witch-hunts, Friedrich Spee, a Jesuit priest, published the Cautio Criminalis, a book speaking out against the trials that were sending thousands of innocent people to gruesome deaths. Spee, who had himself ministered to women accused of witchcraft in Germany, had witnessed firsthand the twisted logic and brutal torture used by judges and inquisitors. Combined, these harsh prosecutorial measures led inevitably not only to a confession but to denunciations of supposed accomplices, spreading the circle of torture and execution ever wider.

Driven by his priestly charge of enacting Christian charity, or love, Spee sought to expose the flawed arguments and methods used by the witch-hunters. His logic is relentless as he reveals the contradictions inherent in their arguments, showing there is no way for an innocent person to prove her innocence. And, he questions, if the condemned witches truly are guilty, how could the testimony of these servants and allies of Satan be reliable? Spee's insistence that suspects, no matter how heinous the crimes of which they are accused, possess certain inalienable rights is a timeless reminder for the present day.

The Cautio Criminalis is one of the most important and moving works in the history of witch trials and a revealing documentation of one man's unexpected humanity in a brutal age. Marcus Hellyer's accessible translation from the Latin makes it available to English-speaking audiences for the first time.

Marcus Hellyer is the Dibner Fund Assistant Professor for the History of Science at Brandeis University.