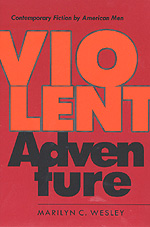 Violent Adventure: Contemporary Fiction by American Men
by Marilyn C. Wesley
University of Virginia Press, 2003
Cloth: 978-0-8139-2212-6
As the mother of young sons, Marilyn Wesley became increasingly concerned about the conflicting messages they received in a world where "Han Solo replaced John Wayne as a national hero and the lost war in Vietnam was mediated by GI Joe dolls and Rambo movies." What, she wondered, do the stories we tell our boys teach them about being men, and what does a culture of male violence teach our boys about being violent men?

Questioning both the popular condemnation of violent representation and the notion that violence can be constructive by empowering the "identity" of an integrated adult self, Wesley identifies a revealing pattern of "violent adventure" in recent fiction by American men. Although the wide range of texts examined in Violent Adventure have in common the use of violence associated with traditional genres of adventure (boy's life narratives, Westerns, detective and war stories, as well as what she terms the contemporary epic), their portrayals add a twist.

Tim O'Brien, Thom Jones, Tobias Wolff, Pinckney Benedict, Richard Ford, Cormac McCarthy, Ernest Gaines, Walter Mosley, Russell Banks, and Don DeLillo all preserve the traditional notion of masculine development as portrayed through violent male action. Yet Wesley contends they do so to demonstrate that violence in fact neither produces power nor promotes the satisfactory entry of young men into a supportive identifying community. By studying the effects of violent representation as it is being rewritten in contemporary literature, Wesley demonstrates that current adaptations by a diverse range of male writers subvert conventional patterns of violent content and generic form to foreground issues of cultural and material power relations.

Marilyn C. Wesley, Professor of English at Hartwick College, is the author of Refusal and Transgression in Joyce Carol Oates' Fiction and Secret Journeys: The Trope of the Woman Traveler in American Literature.
TABLE OF CONTENTS