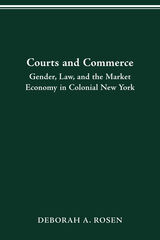 In Courts and Commerce, Deborah A. Rosen intertwines economic history, legal history, and the history of gender. Relying on extensive analysis of probate inventories, tax lists, court records, letter books, petitions to the governor, and other documents from the eighteenth century—some never before studied—Rosen describes the expansion of the market economy in colonial New York and the way in which the law provided opportunities for eighteenth-century men to expand their economic networks while at the same time constraining women's opportunities to engage in market relationships. The book is unusual in its range of interests: it pays special attention to a comparison of urban and rural regions, it examines the role of law in fostering economic development, and it contrasts the different experiences of men and women as the economy changed.

Courts and Commerce challenges the idealized image of colonial America that has dominated historiography on the colonial period. In contrast to scholars who have portrayed the colonial period as a golden age for communal values and who have described nineteenth-century developments as if they had no eighteenth-century precedents, Rosen demonstrates that the traditionally described communal model of eighteenth-century America is a myth, and that in many ways the two eras are marked more by continuity than by change.

Deborah Rosen demonstrates that a market economy based on arm’s-length relationships did not suddenly emerge in the nineteenth century but already existed during the eighteenth century; that women became marginalized from the economy well before industrialization sent their husbands off to factories; and that the law shaped economic development a century or more before judges began to redefine the substance of the law to protect manufacturers and railway owners against expensive lawsuits by injured employees, neighbors, and consumers.

This bold and thought-provoking work will find a welcome audience among scholars of colonial American history, economic, social, and legal history, and women's studies.

AUTHOR BIOGRAPHY
Deborah A. Rosen is an associate professor of history and chair of the American Studies Program at Lafayette College. She is a former attorney and the author of several articles in American Journal of Legal History and Law and History Review.
TABLE OF CONTENTS
Contents
List of Illustrations
List of Tables
Acknowledgments
List of Abbreviations
Introduction
Part I. The Market Economy
1. The Consumer Revolution in Colonial New York
2. The Rise of Debt
Part II. Echange Relationships among Men: Law and Early Capitalism
3. Changes in the Legal System
4. The Spread of Market Relationships
Part III. The Economic Marginalization of Women
5. Women, the Courtroom, and the Marketplace
6. Women, Law, and Money
7. The American Revolution and Beyond
Appendix
Notes
Selected Bibliography
Index