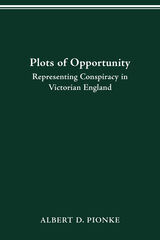 The working classes, colonial subjects, European nationalists, and Roman Catholics—these groups generated intense anxiety for Victorian England’s elite public, which often responded by accusing them of being dangerous conspirators. Bringing together a wide range of literary and historical evidence, Albert D. Pionke argues that the pejorative meanings attached to such opportunistic accusations of conspiracy were undermined by the many valorized versions of secrecy in Victorian society.

After surveying England’s evolving theories of representative politics and individual and collective secretive practices, Pionke traces the intersection of democracy and secrecy through a series of case histories. Using works by Thomas Carlyle, Wilkie Collins, Charles Dickens, Benjamin Disraeli, John Henry Newman, and others, along with periodicals, histories, and parliamentary documents of the period, he shows the rhetorical prominence of groups such as the Freemasons, the Thugs, the Carbonari, the Fenians, and the Jesuits in Victorian democratic discourse.

By highlighting the centrality of representations of conspiracy in every case, Plots of Opportunity shows for the first time the markedly similar strategies of repression, resistance, and concealment used by competing agents in the democracy debate.

AUTHOR BIOGRAPHY
Albert D. Pionke is assistant professor of English at the University of Alabama.
REVIEWS
“This book will engage historians and literary critics alike, and it brings a strikingly fresh perspective to bear on debates about political struggles that have for too long been treated as if they were cut and dried, rather than evolving contests for control of society’s ear.” —John Plotz, Brandeis University