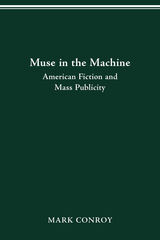 A writer who simply panders to the public is seldom taken for an artist. An artist who cannot publish is seldom granted a career. This dilemma, the subject of Muse in the Machine, has been home to many authors of serious fiction since the eighteenth century. But it is especially pointed for American writers, since the United States never fostered a sustainable elite culture readership. Its writers have always been reliant on mass publicity’s machinery to survive; and when they depict that machinery, they also depict that reliance and the desire to transcend its banal formulas. This book looks at artist tales from Henry James to Don DeLillo’s Mao II, but also engages more indirect expressions of this tension between Romantic individualism and commercial requirements in Nathanael West, Vladimir Nabokov, and Thomas Pynchon. It covers the twentieth century, but its focus is not another rehearsal of “media theory” or word versus image. Rather, it aims to show how various novels “about” publicity culture also enact their authors’ own dramas: how they both need and try to critique the “machine.” In subject as well as approach, this study questions the current impasse between those who say that the aesthetic aspires to its own pure realm, and those who insist that it partakes of everyday practicality. Both sides are right; this book examines the consequences of that reality.
AUTHOR BIOGRAPHY
Mark Conroy is professor of English at The Ohio State University.
REVIEWS
“In a marvelous opening that hearkens back to Shoshana Felman’s Lacanian work on Henry James, Conroy (Ohio State Univ.) explores the effects of the mass marketplace on selected American writers. Conroy's premise is fascinating . . . . This study should stir up valuable discussion about the role of ‘serious’ American writers who never make the best-seller list or land a movie deal.” —Choice


“The virtues of this book are outstanding: superb discussions of the novels covered and a genuinely elegant and enjoyable style. Its combination of accessibility, intelligence, and extensive and well-discussed background reading gives it broad appeal.” —Bainard Cowan, Louisiana State University


“Muse in the Machine is thoughtful, and insightful. It argues that American fiction, more so than other national literatures, has been implicated and imbricated in the mass market and marketing techniques. The recent dispute between Jonathan Franzen and Oprah Winfrey regarding The Corrections, proves how thoroughly American writers are both aware and wary of the marketplace, and the tangible perils and rewards of questioning one’s role in ‘the machine.’ However, as Conroy points out, a publicly announced withdrawal from the marketplace is itself publicity. There is no escape.” —Keith Williams, Southern Methodist University

TABLE OF CONTENTS
Contents
Acknowledgments
Part One: Theoretical and Historical Prologue
1. Introduction: Literature, Inc.
2. Ghosts and Muses: Henry James
Part Two: The Twentieth Century
3. Machine Age and Beyond: From West to DeLillo
4. Letters and Spirit in Miss Lonelyhearts
5. Promise and Prophecy: The Artist’s Vision in The Day of the Locust
6. Quilty the Guilty: Scapegoating Mass Culture in Lolita
7. The American Way and Its Double in Lot 49
8. From Tombstone to Tabloid: Authority Figured in White Noise
9. Mao II: A Portrait of the Artist in the Age of Mechanical Reproduction
Part Three: Epilogue
10. Concluding Unsystematic Speculation: Within the Crisis of No Crisis
Notes
Bibliography
Index