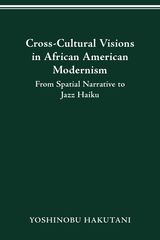 In writing Black Boy, the centerpiece of the Chicago Renaissance, Wright was inspired by Theodore Dreiser. Because the European and African cultural visions that Wright, Ralph Ellison, Alice Walker, and Toni Morrison acquired were buttressed by the universal humanism that is common to all cultures, this ideology is shown to transcend the problems of society. Fascinated by Eastern thought and art, Wright, Walker, Sonia Sanchez, and James Emanuel wrote highly accomplished poetry and prose. Like Ezra Pound, Wright was drawn to classic haiku, as reflected in the 4,000 haiku he wrote at the end of his life. As W. B. Yeats’s symbolism was influenced by his cross-cultural visions of noh theatre and Irish folklore, so is James Emanuel’s jazz haiku energized by his cross-cultural rhythms of Japanese poetry and African American music.

The book demonstrates some of the most visible cultural exchanges in modern and postmodern African American literature. Such a study can be extended to other contemporary African American writers whose works also thrive on their cross-cultural visions, such as Amiri Baraka, Ishmael Reed, Charles Johnson, and haiku poet Lenard Moore.
AUTHOR BIOGRAPHY
Yoshinobu Hakutani is professor of English and University Distinguished Scholar at Kent State University, Ohio. He is the author or editor of many books, including The City in African American Literature, Richard Wright and Racial Discourse, and Wright’s Haiku: This Other World.

REVIEWS
“Hakutani's new book is more than a major contribution; indeed, it is groundbreaking, totally original, and a cutting edge work that will directly impact current graduate studies and help to define the future direction of studies in the field, particularly African American literary studies.”
—Wilfred Samuels, The University of Utah


“Yoshinobu Hakutani mounts an effective argument for the cross-cultural nature of the texts he examines, ending with an especially valuable meditation upon the similarities between twentieth-century African American literary arts and Japanese philosophy and art.”
—Aldon Nielsen, Pennsylvania State University