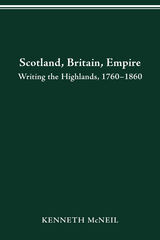 Scotland, Britain, Empire takes on a cliché that permeates writing from and about the literature of the Scottish Highlands. Popular and influential in its time, this literature fell into disrepute for circulating a distorted and deforming myth that aided in Scotland’s marginalization by consigning Scottish culture into the past while drawing a mist over harsher realities.

Kenneth McNeil invokes recent work in postcolonial studies to show how British writers of the Romantic period were actually shaping a more complex national and imperial consciousness. He discusses canonical works—the works of James Macpherson and Sir Walter Scott—and noncanonical and nonliterary works—particularly in the fields of historiography, anthropology, and sociology. This book calls for a rethinking of the “romanticization” of the Highlands and shows that Scottish writing on the Highlands reflects the unique circumstances of a culture simultaneously feeling the weight of imperial “anglobalization” while playing a vital role in its inception.
While writers from both sides of the Highland line looked to the traditions, language, and landscape of the Highlands to define their national character, the Highlands were deemed the space of the primitive—like other spaces around the globe brought under imperial sway. But this concern with the value and fate of indigenousness was in fact a turn to the modern.
AUTHOR BIOGRAPHY
Kenneth McNeil is associate professor of English at Eastern Connecticut State University.
TABLE OF CONTENTS