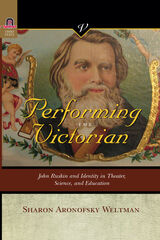 Performing the Victorian: John Ruskin and Identity in Theater, Science, and Education by Sharon Aronofsky Weltman is the first book to examine Ruskin’s writing on theater.
In works as celebrated as Modern Painters and obscure as Love’s Meinie, Ruskin uses his voracious attendance at the theater to illustrate points about social justice, aesthetic practice, and epistemology. Opera, Shakespeare, pantomime, French comedies, juggling acts, and dance prompt his fascination with performed identities that cross boundaries of gender, race, nation, and species. These theatrical examples also reveal the primacy of performance to his understanding of science and education.
In addition to Ruskin on theater, Performing the Victorian interprets recent theater portraying Ruskin (The Invention of Love, The Countess, the opera Modern Painters) as merely a Victorian prude or pedophile against which contemporary culture defines itself. These theatrical depictions may be compared to concurrent plays about Ruskin’s friend and student Oscar Wilde (Gross Indecency: The Three Trials of Oscar Wilde, The Judas Kiss). Like Ruskin, Wilde is misrepresented on the fin-de-millennial stage, in his case anachronistically as an icon of homosexual identity. These recent characterizations offer a set of static identity labels that constrain contemporary audiences more rigidly than the mercurial selves conjured in the prose of either Ruskin or Wilde.
AUTHOR BIOGRAPHY
Sharon Aronofsky Weltman is an associate professor of English at Louisiana State University.
REVIEWS
“Performing the Victorian makes important contributions to contemporary debates about human identity, sexuality and gender, and Ruskin studies, which have increasingly become a growth industry as this central Victorian’s importance in a large number of fields is increasingly recognized.” —George P. Landow, professor of English and History of Art, Brown University


“Sharon Weltman is one of the best writers on Ruskin at present and her argument here significantly forwards her project of revivifying Ruskin’s thought for a contemporary audience. This is a very exciting work, a modifier I don’t believe I’ve ever before applied either to a manuscript or to a published book I was reviewing.” —Christine L. Krueger, associate professor of English, Marquette University