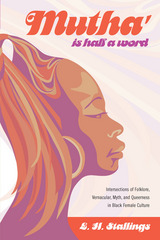 Mutha’ is Half a Word: Intersections of Folklore, Vernacular, Myth, and Queerness in Black Female Culture explores the importance of sexual desire in the formation of radical Black females’ subjectivities in Black women’s culture through the trope of the indefinable trickster figure.  L. H. Stallings offers distinct close readings of understudied African American women’s texts through a critical engagement with folklore and queer theory. To date, most studies on the trickster figure have rarely reflected the boldness and daring of the figure itself. Emblematic of change and transgression, the trickster has inappropriately become the methodological tool for conservative cultural studies analysis. Mutha’ is Half a Word strives to break that convention.

This book provides a much-needed analysis of trickster tradition in regard to gender, sexuality, and Black female sexual desire. It is the only study to focus specifically on trickster figures and African American female culture. In addition, it contributes to conversations regarding the cultural representation of Black female desire in ways that are not strategically invested in heteronormative binaries of male/female and heterosexual/homosexual. The study is distinctly different because it explores folklore, vernacular, and trickster strategies of queerness alongside theories of queer studies to create new readings of desire in literary texts, hip-hop and neo-soul music, and comedic performances by Black females.
AUTHOR BIOGRAPHY
L. H. Stallings is assistant professor of English at the University of Florida.
TABLE OF CONTENTS