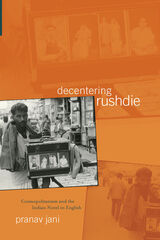 Interrogating current theories of cosmopolitanism, nationalism, and aesthetics in Postcolonial Studies, Decentering Rushdie offers a new perspective on the Indian novel in English. Since Salman Rushdie’s Midnight’s Children won the Booker Prize in 1981, its postmodern style and postnational politics have dominated discussions of postcolonial literature. As a result, the rich variety of narrative forms and perspectives on the nation that constitute the field have been obscured, if not erased altogether.

Reading a range of novels published between the 1950s and 1990s, including works by Nayantara Sahgal, Kamala Markandaya, Anita Desai, and Arundhati Roy, Decentering Rushdie suggests an alternative understanding of the genre in postcolonial India. Pranav Jani documents the broad shift from nation-oriented to postnationalist perspectives following the watershed crisis of the Emergency of the 1970s. Recovering the “namak-halaal cosmopolitanism” of early novels—a cosmopolitanism that is “true to its salt”—Decentering Rushdie also explains the rise and critical celebration of postnational cosmopolitanism.
Decentering Rushdie thus resituates contemporary literature within a nuanced history of Indian debates about cosmopolitanism and the national question. In the process, Jani articulates definitions of cosmopolitanism and nationalism that speak to the complex negotiation of language, culture, and representation in postcolonial South Asia.
AUTHOR BIOGRAPHY

Pranav Jani is assistant professor of English at The Ohio State University.

REVIEWS
“Pranav Jani’s scholarship is sound and invitingly written—calm, patient, and exacting. This is a valuable contribution to postcolonial scholarship, and I would definitely assign it to my students in graduate seminars. It is very welcome to see this important case made—one that a few scholars have broached in other ways—and Jani does it beautifully.” —Timothy Brennan, professor of Cultural Studies and Comparative Literature, University of Minnesota

TABLE OF CONTENTS
Contents
Acknowledgments
Introduction: Looking Back
Chapter 1. The Multiple Cosmopolitanisms of the Indian Novel in English
Chapter 2. Dawn of Freedom: Namak-Halaal Cosmopolitanisms in A Time to Be Happy and The Coffer Dams
Chapter 3. Twilight Years: Women, Nation, and Interiority in The Day in Shadow and Clear Light of Day
Chapter 4. After Midnight: Class and Nation in Midnight’s Children and Rich Like Us
Chapter 5. “Naaley. Tomorrow.” Suffering and Redemption in The God of Small Things
Conclusion: Looking Ahead
Notes
Works Cited
Index