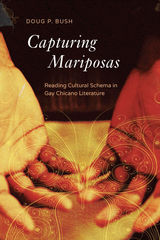 Gay Chicano/Latinx literature often holds an intensely personal meaning for its readers, sometimes being the first artistic expression encountered that affirms their own identity as a double minority in a world that is frequently hostile to both. Nevertheless, much of the academic discourse surrounding this body of literature has overlooked how critical audience reaction can be in this inherently political genre, instead seeing the power of a work as resting within the piece itself.

In Capturing Mariposas: Reading Cultural Schema in Gay Chicano Literature, Doug P. Bush looks at the book as only the beginning, considering how this literature has the power to bring understanding to disparate groups, speak truth about repressed sexuality and repressive communities, and recast traditional spaces as ones of inclusion, all through the idea of the cultural schema. Integrating elements of narratology and cognitive studies of literature, the cultural schema speaks to how these authors challenge, reaffirm, and transform commonly held experiences of gay Chicanos—or potentially any audience who reads their works. Focusing on twenty-first-century writers such as Manuel Muñoz, Rigoberto González, and Alex Espinoza, Bush examines the cultural schema of their works and then moves toward a more holistic discussion of the publishing and political implications of this genre. In addition to Bush’s important scholarship, the book includes extensive interviews with the authors themselves.
AUTHOR BIOGRAPHY
Doug P. Bush is Assistant Professor of Spanish at Converse College.
TABLE OF CONTENTS

Introduction      Genre, Schema, and Looking beyond the Artifact

Chapter 1         Can You Feel Me? Affect and Cross-Understanding in Crossing Vines and Butterfly Boy

Chapter 5         Conversations with the Authors