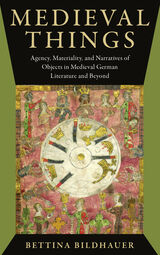 What does medieval literature look like from the point of view not of knights and ladies, but of treasure, and rings, nets and the grail? How does medieval literature imagine the agency of material things, and what exactly distinguishes human subjects from inanimate objects? Medieval Things: Agency, Materiality, and Narratives of Objects in Medieval German Literature and Beyond brings together a theoretically informed and politically engaged new materialist approach with a study of how everyday objects are understood in medieval literature. Bettina Bildhauer argues that medieval narratives can inspire current critical theory on agency and materiality. She focuses on famous and forgotten German narratives from the twelfth to the sixteenth centuries, including Wolfram of Eschenbach’s Parzival and the epic Song of the Nibelungs, and sets them in their global context. Many such tales can be reconceptualized as “thing biographies”—stories that follow the trajectory not of a human hero but of a coin, a gown, a treasure, or a ring. Many also use nets and networks to conceptualize dangerous structures of knowledge. Shine, glamour, and charisma emerge as particularly powerful ways in which material things exert a kind of agency that is neither pseudo-human nor fetishistic. In analyzing details like these from medieval literature, Bildhauer thus contributes in new ways to current theory on agency and materiality.
AUTHOR BIOGRAPHY
Bettina Bildhauer is Professor of Modern Languages at the University of St Andrews.
REVIEWS
“It has been an intellectual delight to read Bildhauer’s lucid, engaging, sophisticated, and learned study, which asks us to fundamentally rethink the agency of objects in medieval fictions.” —Ann Marie Rasmussen


“A vigorous conversation about new materialist and posthumanist approaches to medieval studies is emerging in our field, and Professor Bildhauer’s book is poised to make an original and necessary contribution to it.” —Lara Farina

Chapter 1             Shine and the Agency of Things: The Non-Fetishistic Agency and Narrative Aesthetics of Shiny Things

Chapter 3             Thing Biographies and Narration: The Narrative Constitution of the Agency of Things

Chapter 4             Rings and the Spectrum of Human and Non-Human Agency: The Agency of Things and of Female and Non-Christian Humans

Chapter 5             Treasure, Grail, and the Value of Pragmacentric Readings: Agency as Unavailability and Trajectory

Conclusion          The Agency of Things Reconfigured