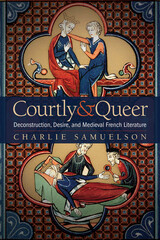 In Courtly and Queer, Charlie Samuelson casts queerness in medieval French texts about courtly love in a new light by bringing together for the first time two exemplary genres: high medieval verse romance, associated with the towering figure of Chrétien de Troyes, and late medieval dits, primarily associated with Guillaume de Machaut. In close readings informed by deconstruction and queer theory, Samuelson argues that the genres’ juxtaposition opens up radical new perspectives on the deviant poetics and gender and sexual politics of both. Contrary to a critical tradition that locates the queer Middle Ages at the margins of these courtly genres, Courtly and Queer emphasizes an unflagging queerness that is inseparable from poetic indeterminacy and that inhabits the core of a literary tradition usually assumed to be conservative and patriarchal. Ultimately, Courtly and Queer contends that one facet of texts commonly referred to as their “courtliness”—namely, their literary sophistication—powerfully overlaps with modern conceptions of queerness.
AUTHOR BIOGRAPHY
Charlie Samuelson is an Assistant Professor of French at the University of Colorado–Boulder.
REVIEWS
“Samuelson is a first-rate medievalist––intellectually rigorous and theoretically sophisticated in ways that enable him to push back against rigid disciplinary constraints and stale orthodoxies. His engagement with verse romance and dits as sites of rhetorical, fictional, and libidinal deviation will inspire scholarly debate for years to come.” —Noah D. Guynn, author of Pure Filth: Ethics, Politics, and Religion in Early French Farce