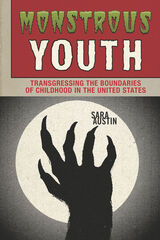 Analyzing how cultural shifts have drastically changed our perceptions of both what it means to be a monster and what it means to be a child, Austin charts how the portrayal and consumption of monsters corresponds to changes in identity categories such as race, sexuality, gender, disability, and class. In demonstrating how monstrosity is leveraged in service of political and cultural movements, such as integration, abstinence-only education, and queer rights, Austin offers insight into how monster texts continue to reflect, interpret, and shape the social discourses of identity within children’s culture.

AUTHOR BIOGRAPHY
Sara Austin teaches in the Department of Global and Intercultural Studies at Miami University. Her articles have appeared in International Research in Children’s Literature, The Lion and the Unicorn, and Journal of Graphic Novels & Comics, among other journals.