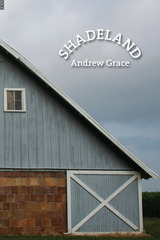 Shadeland is not only the name of the Illinois farm on which poet Andrew Grace was raised, it is also that elusive space where language attempts to recover all that has been lost. Deeply concerned with the state of today’s rural spaces, Grace’s poems describe a landscape and a lifestyle that are both eroding. Stylistically rangy, yet united by an ardent eye for intricate imagery, Shadeland features allusions and influences as classical as Homer, Virgil, and Hopkins while still exhibiting a poetic sensibility that is thoroughly contemporary. Employing a blend of baroque and innovative language, these 21st-century pastorals and anti-pastorals both celebrate and elegize the buckshot-peppered silos and unstill cornfields that are quietly vanishing from the countryside.
TABLE OF CONTENTS