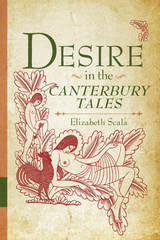 Chaucer’s Canterbury Tales is a discourse of desire. Beyond the many pilgrims’ stories taking desire as their topic, Elizabeth Scala argues that desire operates in structurally significant ways found in the signifying chains that link the tales to each other.

Desire in the Canterbury Tales coordinates the compulsions of desire with the act of misreading to define the driving force of Chaucer’s story collection. With Chaucer’s competitive pilgrimage as an important point of departure, this study examines the collection’s manner of generating stories out of division, difference, and contestation. It argues that Chaucer’s tales are produced as misreadings and misrecognitions of each other. Looking to the main predicate of the General Prologue’s famous opening sentence (“longen”) as well as the thematic concerns of a number of tale-tellers, and working with a theoretical model that exposes language as the product of such longing, Scala posits desire as the very subject of the Canterbury Tales and misrecognition as its productive effect. In chapters focusing on both the well-discussed tales of fragment 1 and the marriage group as well as the more recalcitrant religious stories, Desire in the Canterbury Tales offers a comprehensive means of accounting for Chaucer’s poem.
AUTHOR BIOGRAPHY
Elizabeth Scala is associate professor of English at the University of Texas at Austin.
REVIEWS
“This book is smart, interesting, and timely. It will be a welcome intervention into a number of ongoing discussions in the field and be a major contribution to Chaucer studies.”
—Mark Miller, University of Chicago