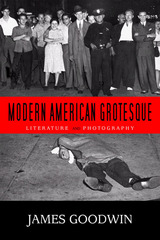 Modern American Grotesque by James Goodwin explores meanings of the grotesque in American culture and explains their importance within our literature and photography. What Flannery O’Connor said in the 1950s of American mass media—that the problem for a serious writer of the grotesque is “one of finding something that is not grotesque”—is incalculably truer today. Ask people what they find grotesque in the national scene and many will readily offer examples from tabloid journalism, extreme movie genres, reality shows, celebrity news, YouTube, and the like. As contemporary life is increasingly given over to such surface phenomena, it is an appropriate time to examine the more deeply rooted places of the grotesque as a literary and visual tradition over the last full century.

A lineage of the modern grotesque evolved in the fiction of Sherwood Anderson, Nathanael West, and Flannery O’Connor, and the photography of Weegee and Diane Arbus. Each of these artists adopts the grotesque in order to recontextualize American culture and society and thereby to advance an attitude toward our collective history. To understand the deep structure of the grotesque Goodwin’s book calls upon contexts that involve visual aesthetics, theories of comedy, prose stylistics, the technology of photography, ideas of reflexivity, and concepts of racial difference.

AUTHOR BIOGRAPHY
James Goodwin is Professor of English at UCLA.
REVIEWS
“James Goodwin expertly traces the ancient roots of the grotesque from the grotto outward in this learned book that ranges widely and authoritatively through different time periods. In Goodwin's sure hands, numerous rich readings of numerous works of literature and photography—from Sherwood Anderson to Diane Arbus—explore time, art, and perception in pursuit of the modern American grotesque.”—Leonard Cassuto, professor of English, Fordham University and author of Hard-Boiled Sentimentality: The Secret History of American Crime Stories


“James Goodwin’s scholarship is meticulous; he appears to have read everything germane to his inquiry and to be in a position draw on much else besides. The book is obviously the product of many years’ reading and reflection. I am filled with admiration for what Goodwin has accomplished. No college or university library can afford to be without Modern American Grotesque.” —Richard K. Cross, professor of English, University of Maryland