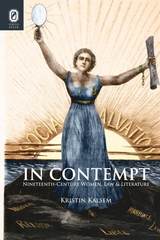 In Contempt: Nineteenth-Century Women, Law, and Literature, by Kristin Kalsem, explores the legal advocacy performed by nineteenth-century women writers in publications of nonfiction and fiction, as well as in real-life courtrooms and in the legal forum provided by the novel form.

The nineteenth century was a period of unprecedented reform in laws affecting married women’s property, child support and custody, lunacy, divorce, birth control, domestic violence, and women in the legal profession. Women’s contributions to these changes in the law, however, have been largely ignored because their work, stories, and perspectives are not recorded in authoritative legal texts; rather, evidence of their arguments and views are recorded in writings of a different kind. This book examines lesser-known works of nonfiction and fiction by legal reformers such as Annie Besant and Georgina Weldon and novelists such as Frances Trollope, Jane Hume Clapperton, George Paston, and Florence Dixie.

In Contempt brings to light new connections between Victorian law and literature, not only with its analysis of many “lost” novels but also with its new legal readings of old ones such as Emily Brontë’s Wuthering Heights (1847), George Eliot’s Adam Bede (1859), Lewis Carroll’s Alice’s Adventures in Wonderland (1865), Rider Haggard’s She (1887), and Thomas Hardy’s Jude the Obscure (1895). This study reexamines the cultural and political roles of the novel in light of “new evidence” that many nineteenth-century novels were “lawless”—showing contempt for, rather than policing, the law.
AUTHOR BIOGRAPHY
Kristin Kalsem is professor of law and co-director of the Center for Race, Gender, and Social Justice at the University of Cincinnati College of Law.
REVIEWS

“Kristin Kalsem’s In Contempt makes a significant contribution to scholarship on the history of feminist jurisprudence. She covers thorny legal issues including married women’s property, infanticide, and lunacy law, as well as birth control, imperialism, and women’s admission to the bar. In her afterword she urges scholars to engage the ‘new evidence’ she has brought to light—and I have no doubt that this evidence will be welcomed enthusiastically.” —Christine L. Krueger, professor of English, Marquette University